In Mrs. Poole's science class, we are learning about life science. Life science is involved with the life we live, and also the environment and other living organisms that are around us. We are also learning how to use certain tools such as an microscope, a triple beam scale, etc. The tools that we are learning to use are involved in many different projects and experiments. 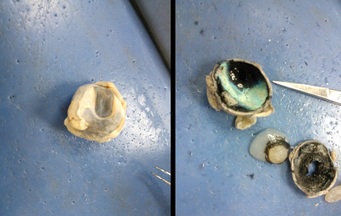 Click for larger image
The sheep eye dissection is the first dissection we did in science. It was a very awesome experience! Everybody had to work in pairs. The main objective of this dissection was to explore the eye parts of the sheep. Most of the eye parts are very similar to the human eye, so  it was like being able to look at the inside of our own eye. This dissection allowed me to learn more about the eye.

The first thing we did was take out the outer layer of the eye. That layer protects everything else in the eye. Next, we cut the eye in half and took out the front portion of the eye. At the end of the dissection, everything was separated and took out into individual parts. From there, we investigated every part and learned about it. In this project, we just used the basic tools to dissect the eye: scissors and tweezers. The scissors was an important part to the dissection because it was the tool that allowed us to take apart the eye. Without that, we wouldn't be able to inside of the eye and the different parts. The tweezers allowed us to pull out all the different parts in the sheep's eye. My bad experience from this was when the juice of the eye squirted on to my upper lip. It was very disgusting, but very funny.

By Golly. By Gum, By Time 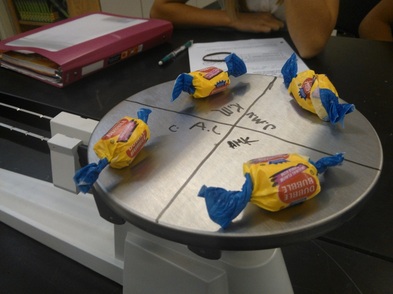 Click for larger image
This assignment was done in Mrs. Poole's science class. The whole class had to chew gums for 10 minutes. We had to stop every 2 minutes to put the gum down on the balance. The purpose of that was to see if the mass of the gum would decrease or increase. In this case, the mass of the gum did decrease. In the first 2 minutes, it decreased very quickly. After those two minutes, it just decreased by a smaller amount. It was a fun opportunity to have the one and only chance to eat something during science class!

I can relate this project to when I first received my phone. I wasn't use to my phone yet because I didn't know where everything was. I had that same experience with the triple beam scale. It was a new thing for me, but eventually I learned how to use it and it became familiar. I learned many things from this project. I learned how to correctly use a triple-beam balance and how to find the mass of an object. When using a triple-beam balance, you have to start at the hundreds. If you move it to the right, and it gets too heavy, you have to move it one back. Then you go on to the tenths, and then the ones. If you don't do it in that order, it will probably be wrong. At first, I didn't think I would be able to find the mass of this object. But turns out it was a piece of cake. The mass of the gum was wherever the measurements were.  Using the triple-beam scale to determine the mass was very useful in this project. I also learned something new which was learning how to use this tool. Hopefully, this lesson will also be helpful in the future.