In Mr.West's Science Workshop class, also known as rocketry, we learn all about rockets. There are many things to learn about in this subject. Some of the things we discuss about in this class are how rockets fly, how far a rocket travels if weight is added, what causes a rocket to fly, etc. The most interesting thing about this class is actually getting to build things. For example, we have actually built small rockets and launched them into the air. This class is very exciting to have, and it keeps your mind curious about science and engineering.
Mr.West's Website 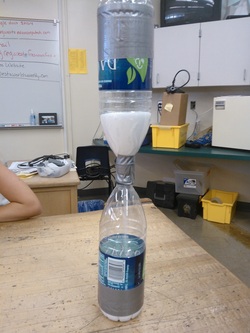 I learned many things from this project. For example, the research for the presentation. I learned that in Ancient times they used a tool called the sundial to keep track of time. When the sun's beam hit the sundial, it also hit the marking on the surface. That marking indicated what hour it is. I  learned a bunch of other things like what an atomic clock is and why there are 60 seconds  in a minute, 60 minutes in an hour, and 24 hours in a day. Basically, I learned about time. This project involved a lot building and I'm not much of a builder, but this project allowed me to think outside the box. I also learned how the materials my partner and I used worked. Sometimes we needed to change or add materials because it always didn't work out the first time.

My partner and I used very simple tools: salt, water bottles, tape, and glue. What we wanted to build was something similar to a hourglass. Of course, we weren't able to find that special type of glass or sand, so we had to improvise. We used these type of water bottles because it had a funnel top. The funnel style allowed the salt to go down very smoothly. We taped the two water bottles and bottle caps and created a hole in the caps so the salt can go down to the other bottle. To know whether it it would stop at 5 minutes or not, we had 5 time trials. After every trial, we would either add more salt or take out some salt. After many imperfections, mistakes, and fixes, our "hourglass" finally stopped at 5 minutes. 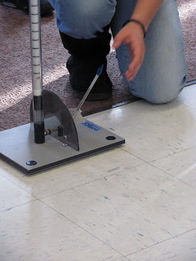 Based on our results, I learned that the 2nd rocket was the one that went to the farthest. We thought the one with all 4 four fins was going to go the farthest because it had more guidance and it was complete. But we were wrong. I also think it had something to do with the amount of clay added. We didn't have an exact amount to put in, so maybe there was less or too much added to every rocket. For this project, we only used straws, clay, paper fins, and tape. I didn't know you could actually build something with these materials. We also used the launch pad to angle the direction of the rocket. That was also my first time using that. Overall, I learned a lot from this project and it was exciting to actually build something for once.