In Mr. West's robotics class,  we are learning how to program our robot to do specific things. Some of the tasks we are assigned to do is make our robot follow a black line, make it go through a maze, and much more. We also learn how to determine the speed of the robot, how far it travels, how many rotations does it need when it turns, etc.
Mr. West's Website

Battle Bots: Fight to the POP! 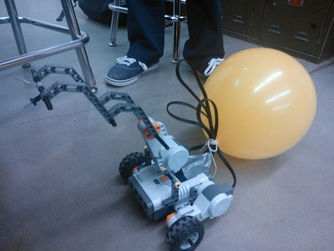 Click for larger image
This project was called Battle Bots. In Battle Bots, we had to build a creative robot that would be able to pop our component's balloon when in battle. There was a 60"x 60" square marked on the floor where we held our robot battles. We had 90 seconds to either push our component out of the square, or pop its balloon. In most cases there were two rounds, but if there were ties, it usually went to a third round. I really enjoyed this project because it involved a lot of strategy and hard-work. It was also fun watching other battles. My partner and I popped our component's balloon twice in the first round, but in the second round we were not as successful as we were in the first. I learned how to develop strategies and come up with clever designs for my robot from observing from other people and also just thinking thoroughly.

We were provided with thumbtacks so we were able to attach it to our robot. As you can see, the balloon was tied to the back and the thumbtack was attached in the front. My partner and I came up with this design because we figured that if the balloon was in the back, our thumbtack should be just like a claw. We controlled our robot by using our laptop. It  was wireless because we had connect it through blue tooth. I really enjoyed this because it was much easier than programming it. 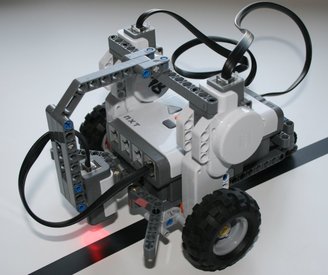 Click for larger image
In this project, we had to program our robot to follow a black line. I learned that the light sensor is very useful because it helped the robot detect the black line and follow it in a straight path. I also learned how to program the robot to make the light sensor work correctly.  I can relate this project  to drafting. When I first started this robotics project, I had no experience at all. But after getting use the tools and following the directions, it became less challenging.

We used many tools for this project. Whenever we need to build the robot in a specific way, we have to use the Lego Robot kit. The Lego Robot kit contains many parts you can add to the robot. Some parts are like the wheels and sensors. Of course, you need the wheels because it allows the robot to move. The light sensor was important to this project because we had to learn how to use it. You also need the  monitor because that is where all of the programs are downloaded to. We used a computer to program the robot. We used a program called NXT Mindstorms. That is where we download the different tasks into the robot.