In Mrs. Frazier's history class, we are learning about several different cultures, beliefs, and religions that are around practiced all around the world. Along with that, we also learn about their history. Every part of the world has its own unique origins. 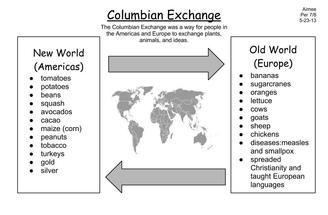 Click image for larger view
This project was apart of the Explorers Project. For this assignment, we have to demonstrate our understanding of the Columbian Exchange using a graphic organizer. In case you didn't know, the Columbian Exchange was a way for people in the Americas (New World) and Europe (Old World) to exchange plants, animals, ideas, and much more. For this project, I used Google Drawing to create the graphic organizer. I put the items that belong to each world  on separate sides and used the arrows to indicate that these items were "exchanged." 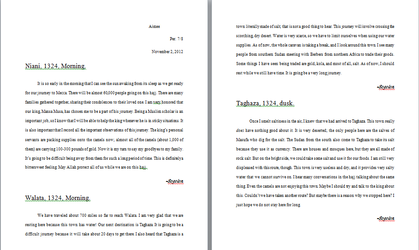 Click for larger image
In this project, we had to write 6 journal entries with at least 10 sentences in each. In those 6 journal entries, we were to describe about the historic hajj we went on with Mansa Musa, the king of the Mali empire. It involved describing about the route we took to Mecca, what we saw, where we rested, the people we met, etc. We also chose the person we wanted to be. For example, I was a Muslim Scholar named Sologon. There were other choices also, such as griots, soldiers, slaves, etc. From this project, I learned about the hajj that Mansa Musa and his caravan went on. There were almost 60,000 people going on the hajj, and 50% of them were his slaves. I learned that he and his pilgrims went through many sacrifices for the hajj, but they also had an amazing experience. I really enjoyed this project because it allowed me to be very creative, and I enjoyed playing the role of being somebody that went on a hajj. It is like what  I would have done if I went on that pilgrimage.

I could relate this project to a regular diary. In  many diaries, people record the special events of their lives, or maybe even everyday of their lives. It's like a historic record of their life. It is very similar to this project. To create this project, I used Microsoft word. I chose this over hand-writing it because I type very fast, and it was much simpler. When I finished printing it, I was able to burn the edges of the pages and crumple it up. It made the diary look very ancient.

The Fall of the Roman Empire Poem 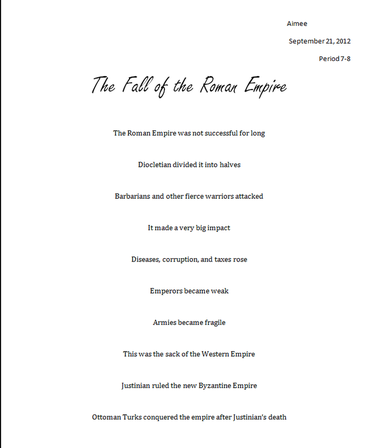 Click for larger image
In this project, we had to write about the fall of the Roman Empire in a poem. The poem had to be  8-10 lines long, it had to have at least 2 rhyming lines, and it had to include Diocletian, barbarians, taxes, Justinian, the Byzantine Empire, and anything else that was a main factor to the fall of the empire. I learned many things about the Roman Empire from doing this project. I learned that there were many factors to the fall of the empire. The empire was not successful for long because there were irresponsible leaders, warriors attacked all the land that was conquered, and they had to much land. But I do think that the most effective reason why the Roman Empire collapsed was because the emperors conquered too much land. It was difficult to control which caused many invasions.

I can relate the fall of the Roman Empire to other empires that had fallen apart in past. Those empires also collapsed because of the same reasons why the Roman Empire fell. For example, the Byzantine empire fell apart because they had been attacked by the Ottoman Turks. The Roman Empire also fell because they were attacked by the barbarians and other warriors. We used Microsoft Word for this project. I think using Microsoft word for this project was helpful. It was easier typing it out then writing it out. It also looked better and it allowed us to design our poem by adding different types of fonts and borders.